Human Wizard with a flair for the dramatic... and a few explosions.

At Will : Magic Missile, Chilling Cloud, and Thunderwave

Who is this chump, and why should you care?

Elrick was a boy from a poor farming village. His father was a farmer, as was his father before him. During the spring of his 13th year, his village was besieged by a vile necromancer. Friends faltered and fell around him, only to be raised as skeletons to raid the town. When all seemed lost for the tiny village, a man in a magnificent Green robe wandered into town. He spoke infrequently, but when he did, it carried the weight of his organization. He was The Green, the eldest member of the Prismatic Order. He walked into the hordes of the undead single-handedly, and with a single flick of his wrist, they crumpled into dust. The Necromancer cried out as The Green cast a spell to encapsulate him, trapping him and his wickedness for justice.

The town had lost many of it’s citizens, but among the dead were Elrick’s parents. Without anyone to look after him, he asked the wizard if he could join him. The Green merely walked out of town, but Elrick followed him, asking to be an apprentice all the while. Hours passed, and night fell. Elrick continued to ask until the Wizard raised his arm toward a large tower. This tower was painted with every color of the rainbow, a fitting home for the Prismatic Order. This would be Elrick’s new home, and the start of his new life as Elrick The Orange.

While The Green might have granted him solace, and training, there was something more important from his tutelage. Faith. Not just faith in himself, which was something that magic only enhanced, but in others. It’s hard to believe in something greater than yourself, but as his training went on, as well as his adventures with Fane, Fangrim, Batalash, Ronen, and even that sorcerer whom’s name eludes him… Faith that not only were there friends with a common goal to make the world better for everyone, but that something greater than ourselves also sought to guide us. The Silver Flame.

How Good Lookin’ Is This Guy?

Besides his flair for the explosive, and his overwhelming desire to see his compatriots in pants, Elrick is not as impressive physically as he’d like. He tends to make up for it with complicated words, a flashy (almost distracting) orange robe, and an almost showman like quality to make the even most mundane words flow through him like they were written by the very Flame itself.

He is almost NEVER seen without his robe, and anyone lucky (unlucky?) enough to do so would notice only one thing unusual about him. A rather large scar across his right shoulder down to nearly his hip. It was from a wound delivered by his father, once the Necromancer turned him into a servant of the undead. If asked, he’ll become very quiet and likely ask that the topic be changed. Elrick managed to escape before suffering worse.

He has trouble getting comfortable when upon the seas. A train or an airship? That’s fine. But water crafts just make him uncomfortable. If he’s going to be forced onto a long term ship ride, he’ll opt to cast sleep upon himself to keep his jittery-ness to a minimum.

PC Ties : How do they know each other?

This is a work in progress. Tune in later to find out more!

This is what he’d say about them…

“Fane”: Fane of Aruldusk : ‘Are you kidding me? That man has more drive and fire in his belly than most people who are on a train and on fire. On more than one occasion has he saved my life, and on twice as many, I have saved his. Oh, I doubt he’d agree with my math…’

“Durgalis”: Duragilis Laedon : ‘So far, my experience with the Half-Orc race has been exemplary. Why all the persecution? Anyone willing to stick arrows into the thing I’m trying to set on fire is just fine in my books!’

“Naali”: Naali ‘Honeymouth’ Thamikeil-thavo : ‘Have you seen her arms? They’re as big around as I am. I just hope I don’t babble too much when I drink around her… Last thing I need is those tree trunks chasing me down with the intent to snap my fragile little neck. Won’t be making any sexist remarks while she’s in earshot… I hope.’

So, what does he hope to accomplish?

At this moment, he’s Elrick the Orange in name only. The Green has not formally recognized him as a wizard of the highest caliber, so he has much to work on. Until he’s known by name is no less than three separate provinces, municipalities, and city-states, The Green will not recognize him for his spot in the Prismatic Order. This sort of renown only comes from truly great acts of daring and heroism.

On a slightly more personal note, there’s been word that his hometown has begun experiencing the horrors that befell him in his youth. If his travels take him in that direction, and The Flame wills it so, he wants desperately to cleanse the town of whatever evil has taken root. Of course, if presented with the corpse of his father, he possesses great doubt that he’d be able to raise his hand against him. 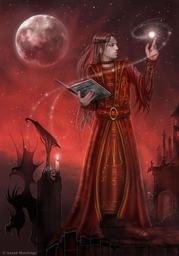