A Githyanki With Something To Prove

Goresh is not like other Githyanki. In a society where the women rule everything, he sought to be judged by his merits, not his gender. Thoughts like this tend not to go over well. So, when Goresh found himself stranded on Eberron as part of a “reconnaissance” mission for the Githyanki people, he took it with a grain of salt. This was a chance to start over in a world that doesn’t know of him, or his ideals.

Of course, BEING Githyanki has caused no end of troubles for him. So, when a wizened wizard in a green cloak offered him training and solace, he leapt at the chance. He was introduced to the elements and melding them with his blade. The man in green told him of his plans to spread magic and knowledge of it across the globe of Eberron. He had hoped that Goresh would be an ambassador to those goals. Goresh accepted.

As per the terms of his hire, he goes around and investigates the people of the Prismatic Order. For the most part, he’s only found politicking and betrayal. When he encountered talk of Elrick the Orange and his good deeds, he was intrigued. He sought out his known accomplice, Fane, and began to ask questions. Fane was about to introduce them, until tragedy struck. Elrick had fallen.

Goresh now seeks to understand what made Elrick do the things he did, and to report those findings back to The Green stationed in Xen’Drik 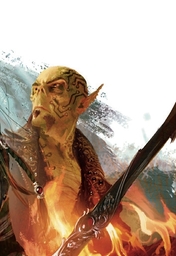